Intel’s new Alder Lake 12th gen CPUs are out, and casual gamers and enthusiasts are including these new chips in their builds. The Intel Core i9 12900k is this year’s top-of-the-line chip requiring decent coolers since it’s an unlocked chip that can be overclocked quite a bit.

Considering how intel doesn’t include any coolers with the 12900k, you’ll have to pick an excellent 3rd party one if you want to achieve maximum performance while maintaining minimum temperatures.

There are many types of coolers to choose from, ranging from AIOs to air coolers. If you are in the market for a cooler for your new 12900k CPU but can’t decide which one to go for, then you’ve come to the right place as we’ll be discussing the 9 Best CPU Coolers for the Intel 12900k.

We will be classifying them based on several different factors, such as pricing, fan noise, whether it’s an AIO, Air Coolers, etc. So, let’s get into it! 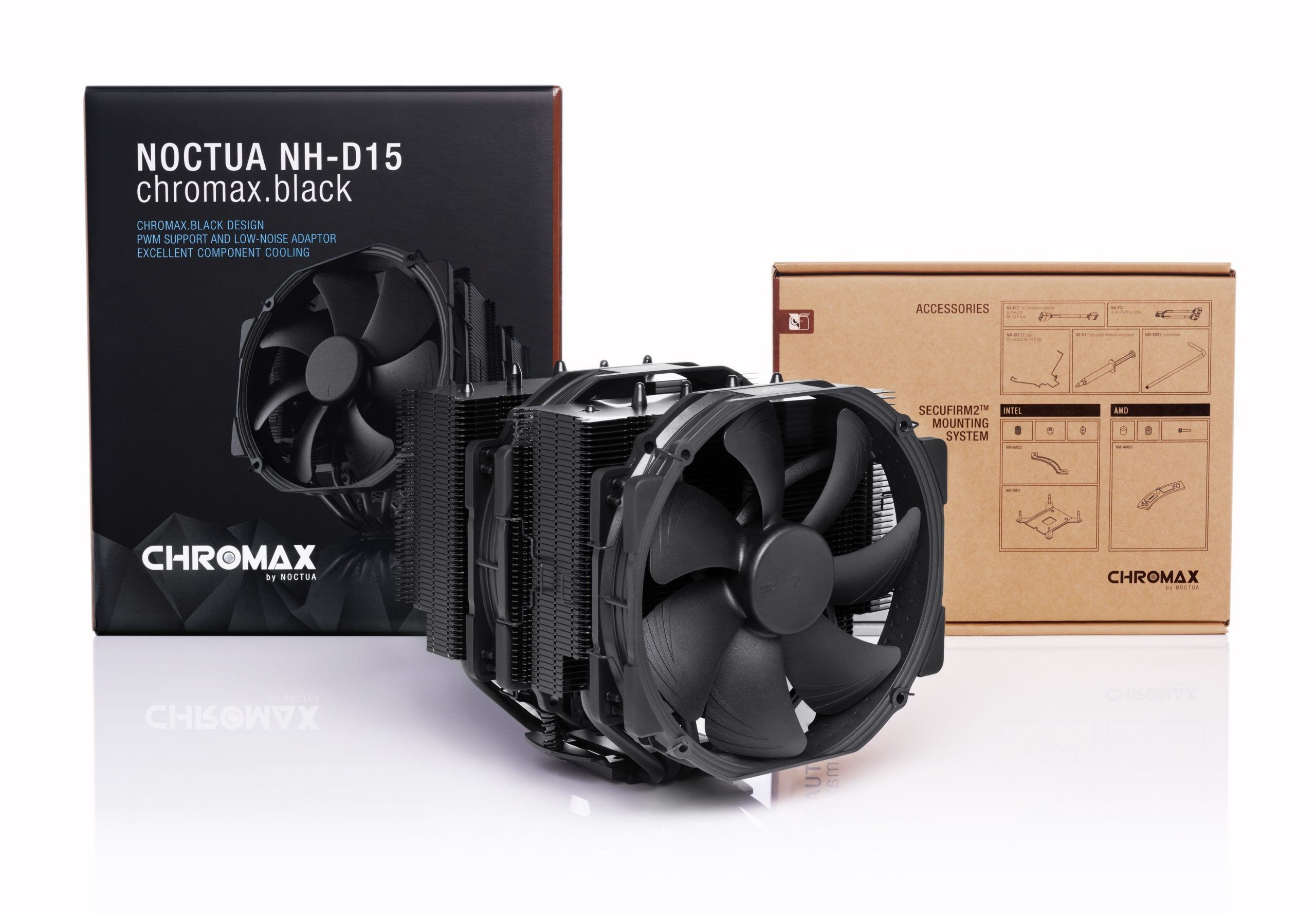 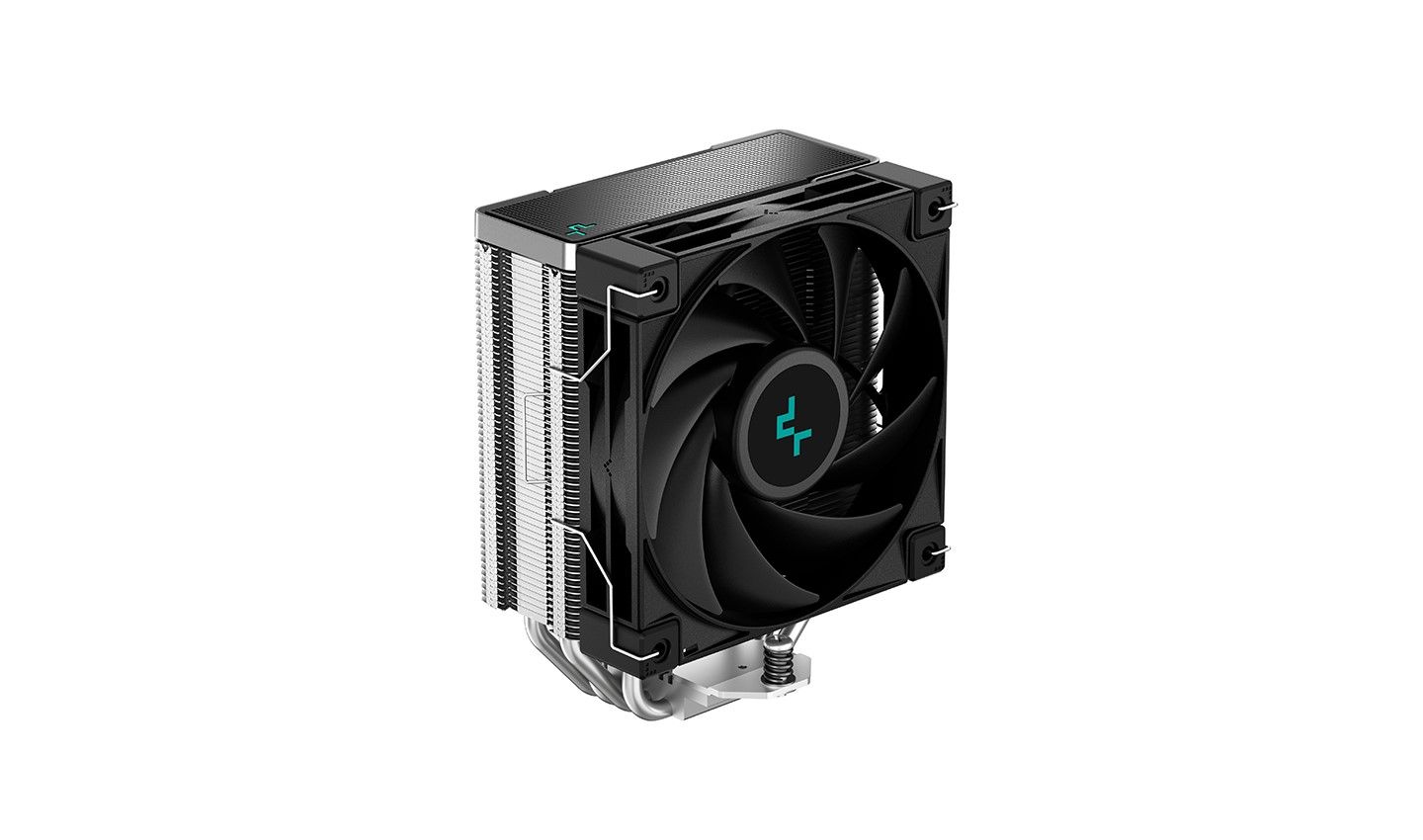 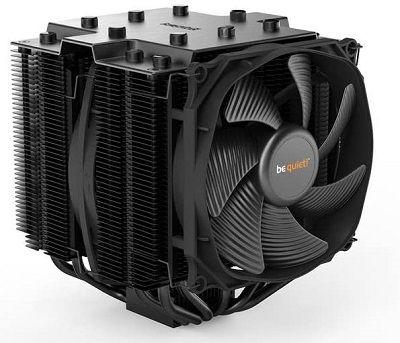 There are different types of Sockets/Processors,

LGA is notable for having pins on the socket rather than the Processor, which is far more durable than PGA.

A CPU Cooler is usually in a tower design shape. Before buying a CPU Cooler, the dimensions should be checked and compared to the height available in your casing. It should be written on the manual of the case. If the casing lists a maximum height of 150mm, and you accidentally buy a 160mm, it won’t fit. You will have to either buy a new smaller cooler or remove the side panel.

The Noctua NH-D15, for example, is 165mm in height, surpassing many small form factor casing limits.

TDP measures the maximum amount of heat generated by a specific component.

It is one of the significant factors in deciding how efficient a CPU Cooler is. The higher the TDP, the faster it can cool down.

Higher TDP is always better. But a larger Cooler plays an impact as well.

Our Recommendations For Best CPU Coolers for Intel i9 12900k

We have provided a list of CPU coolers which will be discussed in this article. These CPU coolers are the best cooling options that keep the motherboard cool even at peak times.

Noctua has a long-standing reputation for making the most efficient CPU coolers and fans for PC Enthusiasts. Their beefiest CPU Cooler Noctua NH D15 Chromax is no pushover when it comes to CPU Coolers, which even manages to beat AIOs in thermal testings.

Being at 165mm in height, it can handle 250 TDP. Its 6 Heatpipe dual-tower design gives it the optimum thermal efficiency needed, which is more than enough to cool down an I9 12900K properly.

While effortlessly moving air at 19.2 dB and lower, thanks to its Dual NF-A15 140mm fans, the best in class fans.

As well as including low fan noise adapters to muffle the noise further. and PWM that allows complete control over the fan speed from your motherboard bios or fan controller software. So that you can run the CPU cooler at max speed whenever needed and quiet as a whisper on Idle

The box even includes their high-end NT-H1 thermal paste to maximize the thermal capabilities further.

As the cooler is very bulky, Noctua provides their SecuFirm2 mounting system for ease and support.

Not to mention it looks very premium. The same can not be said for many other Coolers on this list. This is why Noctua’s NH-D15 tops our list and is currently the Best High-End Cooler available on the market.

DeepCool was founded with the mission to provide high-performance PC parts and Thermal solutions for enthusiasts at a low price.

Their cheapest offering, Deepcool AK400, is labeled as the best price-to-performance ratio cooler, with many qualities of a premium CPU Cooler under 35 dollars.

Four direct touch heat pipes rapidly transfer heat from the Processor to the fins with a unique matrix-style tower design. Being at 155mm, it can easily fit inside 160mm maximum height casings.

Deepcool has made new all-metal mounting brackets, which offer an effortless five steps process for securing the cooler.

A high-performance FDB fan maximizes airflow and static pressure at 1850 RPMs while being at 29 dB. and intelligently slows down for silent efficiency with the help of PWM connections.

Be Quiet! Has mastered the art of making silent but exceptional CPU coolers. Their newest and bulkiest offering, Be Quiet! Dark Rock Pro 4 is a CPU cooler that has silenced every other cooler with its excellent performance, Offering the best cooling performance while being inaudible.

All this is possible due to Be Quiet!’s Silent Wing 3 Fans. They offer the best noise-to-airflow ratio balance, resulting in great thermals. Moving air in and out through the Airflow-optimized cooling fins allows for faster heat dissipation.

Adding another Silent Wings 3 PWM fan in the back can result in even more outstanding performance.

With the help of PWM Connections, the fans can achieve dead silent noise at idle and 24.3dB at max speed. Excellent for overclocked CPUs and workstations. Especially for those who like to keep their system inaudible

It’s rated to perform at 250 TDP, Which is on par with the Noctua NH-D15 while being 20 dollars cheaper.

The shape of the fins allows for the front fan to be raised, resulting in taller rams being compatible with the cooler.

Due to the front fins and fan being raised, the height of this cooler is 163mm, which is over the maximum height for some cases.

Noctua is back with another entry, this time being in the Super Small category. The successor to the award-winning NH-L12 is Noctua NH-L12S.

The NH-L12S is a premium-quality low-profile solution for the highest demands.

Thanks to its In-house NF-A12X15 PWM, super slim 120mm fan. Being Highly versatile. Mounting the fan on the top makes it compatible with RAM modules up to 48mm in height, which is more than enough.

The Brown colored fans might be an eyesore to look at, but the performance that it delivers is enough to tolerate it.

We all hope Noctua would eventually release a black version, as they have done with all their other coolers, such as the NH-D15 Chromax.

Cooler Master is the go-to brand when it comes to AIOs, for their supreme durability, looks, and performance. And the Cooler Master MasterLiquid ML240 in Illusion White checks all those boxes.

It redefines RGB visuals with all new design features. The color options are spectacularly customizable, with 60 Addressable RGB LEDs integrated into the new translucent pump.

Complemented with MasterFan MF120 are air-balanced fans offering high static pressure allowing air to reach other components, all while having low noise. Halo fans lighting features are more than even visual enthusiasts can handle.

Paired with an Aluminum radiator that is 277 x 119.6 x 27.2 mm in size, which is enough to cool down a beast while maintaining its integrity and looks.

When it comes to well-known and affordable CPU Coolers, Cooler Master’s Hyper 212 is Always there.

CM has released a newly refined version of Hyper 212, Cooler Master Hyper 212 Black Edition. A sleek finishing of Anodized gun-metal black with brushed aluminum, from bottom to top, gives a refined look. Only 158mm tall, it can fit inside 160mm casings easily.

It is paired with a single Silencio FP120 featuring Silent Driver IC technology, which reduces noise and power output. The fan blade design, inspired by helicopters, packs more force into the space in front of the fan.

This can be doubled by adding another FP120 in the back, providing the CPU Cooler with a proper push and pull configuration, allowing unrestricted airflow with high static pressure. All while comfortably sitting at 26.0 dBA.

The ROG Ryujin II 360 is the Flagship AIO from ASUS. Delivering ultimate performance for gamers and enthusiasts looking for the absolute best.

The Asetek 7th generation pump is the best in class, allowing for satisfactory cooling capabilities and preventing leaks because of industrial-grade seals.

It comes with a pre-applied thermal paste and a patented micro fan inside the pump to maximize cooling performance on and around VRM and M.2.

Allows for optimum air pressure and speed while at 29 dB.

It does not have any RGB on the fans, but the massive screen on the pump makes up for it.

The Liquid Freezer II 240 manages to handle even the most powerful processors from Intel, performing effortlessly over 200W TDP of heat to be dissipated, setting new standards in terms of cooling capabilities in 240mm categories.

The pump of Freezer II has a pure copper cooling plate that allows heat to be quickly dissipated and an embedded fan that helps to cool down the surrounding VRMS and MOSFETS. It is also PWM controlled, significantly reducing the noise levels and humming while increasing efficiency and cooling capacity.

Arctic Liquid Freezer II 280 is quite literally as cool as the Arctic. It is the best AIO in price to performance in the 280mm size category.

The Liquid Freezer II is known for its performance, price, and quiet operation. It exceeds all expectations and has set new benchmarks in the field of water cooling. Unlike many AIOs, Arctic Liquids Freezer is also PWM, leading to significantly lower noise levels, greatly reducing humming, and increased efficiency.

With the pure copper plate, heat is quickly transferred from the pump to the radiator, to be moved away immediately by the in-house P14 Fans.

The Liquid Freezer II’s main strength is its fans, paired with 2 PWM P14 Fans, which are High static pressure fans for improved cooling and performance while being 140mm, allowing for more air to pass through a 38 mm thick radiator with a high fin density. Resulting in best in class performance and cooling.

The Intel Core i9-12900K is the best processor I’ve tested in a relatively long time. It outmatches AMD’s top-performing desktop processors by a significant margin, and its price is competitive.

When using a high-end cooler, the 12900K CPU’s support for overclocking can be excellent for performance with the latest graphics-intense games. The 8 Performance cores have a 3.20 GHz base frequency and support a 5.10 GHz max turbo frequency.

What does K mean in Intel processors?

The “K” chips are usually the fastest, with higher clock speeds than the standard chips without a letter in Intel’s mainstream chips. It also means the chip is “unlocked,” where its clock speeds can be tweaked — or “overclock” — by a user to squeeze out a little extra performance than what you get out of the box.

Is an unlocked CPU worth it?

A locked or unlocked CPU is unlikely to make a noticeable difference for most productivity tasks. While it’s true that a faster CPU is better, a lot of productivity workloads don’t need to utilize very much of your CPU and are instead more stressful on storage and memory. 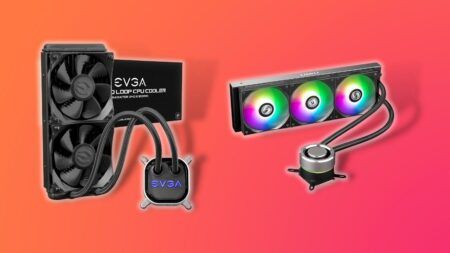 CPU being the most important part of the laptops/computers also needs to be taken... 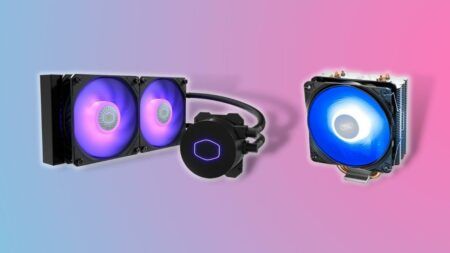 Ryzen 5 5600x is the desktop processor having a family line of AMD Ryzen... 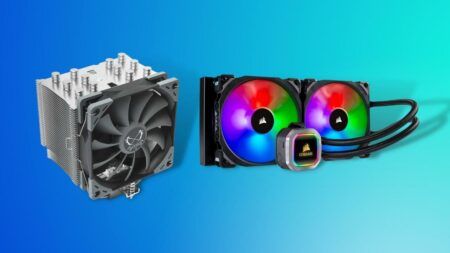 Ryzen, Ryzen, Ryzen! Gamers are a huge fan of the Ryzen Zen 3 CPUs... 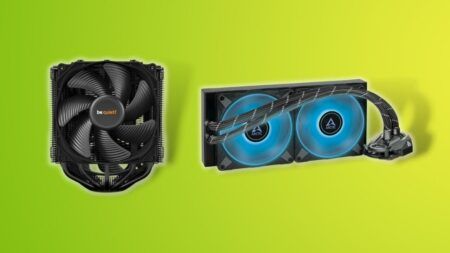 Ryzen Zen 2 CPU is the CPU that has become every gamer’s choice in... 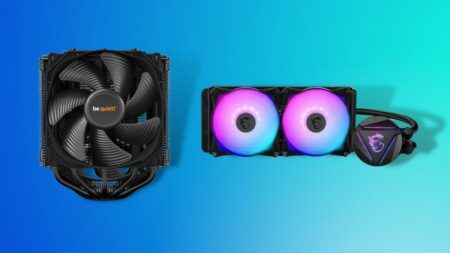 If you're a gamer, you know that having the right gaming keyboard can make...

How Hot Is Too Hot for GPU?

As we continue to push the boundaries of what is possible with graphics processing...

By Thomas Sage
•
Updated 3 months ago November 4, 2022
Knowledge Base

How to Fix Dram Light Issue on Motherboard

If your dram light is on, it means there is a problem with your...

Are you looking for a small PC case to use in your home or...

What Is Shared GPU Memory?

If you've been wondering what shared GPU memory is, you're not alone. A lot...

There is a lot of debate over whether or not GPU clock speed matters...

Are AIO Coolers Safe? How Reliable They Really Are?

There are many cooling options for CPUs, and one of the most popular are...

What Is GPU Artifacting?

Technology is not perfect, and even the best tools can sometimes malfunction. All of...